Water reuse: a growing market of opportunity and challenge 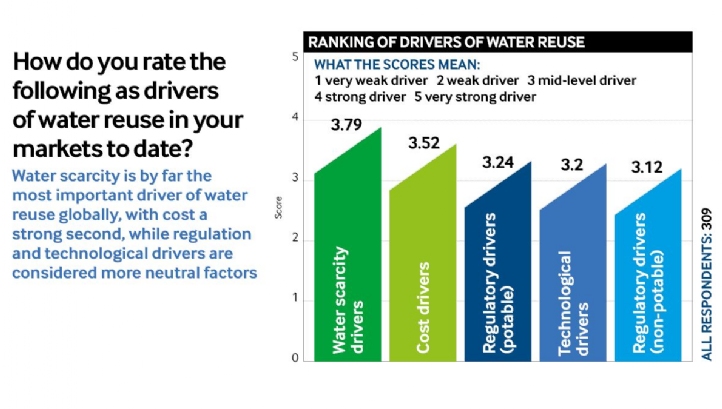 Survey findings suggest a market with the technical expertise, innovative ideas, and will to service customers’ water needs, while a lack of money, reluctance to take chances on new technology, and instances of poor governance present challenges.

Our survey was conducted during the four weeks to 19 July 2017, to gauge perceptions among desalination and water reuse professionals about the factors that are influencing the development of water reuse markets globally. The results from 347 respondents from a wide range of industry roles across the Americas, Asia Pacific, Europe, and Middle East and Africa (MEA), provide a broad set of perspectives on what is driving reuse, and how markets are shaping up.

The findings reinforce the generally held view that for those working in the water industry in the Americas, Asia Pacific and MEA, the challenges around reuse are more immediate compared to those in Europe.

Water scarcity and cost emerged as the factors considered to be the strongest drivers of water reuse. Scarcity was highest, scoring 3.79 out of a possible five points, followed by cost at 3.52. This puts them on average between a “mid-level” and a “strong” driver.

Scarcity was a concern particularly among those working in the Americas, and even more so for the sub-group focusing on municipal projects. Cost was scored the highest by those working in MEA, closely followed by the Americas and Asia Pacific, while for Europe, the cost factor is markedly less of a strain.

In fact, cost scored highly both as a driver and a barrier to water reuse: the cost of water is a driver because it encourages optimal use of a precious commodity; and the challenges of financing specialised water reuse plants — including the development costs and the price of water purification technology — is seen as a barrier to developing new projects.

Cost was rated as the most significant barrier to reuse, scoring 3.56 out of a possible five points. In the write-in comments on barriers, one chief/ head of department of an industrial plant owner/ operator, based in MEA, noted that “technology cost,” was a barrier. Meanwhile, “availability of capital,” was a concern for the director of a European engineering firm.

Cost was rated most strongly as a barrier by respondents working in Asia Pacific, who scored it higher than those in other regions.

Out of seven suggested fields of innovation in the marketplace, water treatment technology topped the list, scoring 3.79 out of a possible five points. The rating is encouraging for technology companies, write-in comments from several of which suggest that introducing new technologies to the market is a challenge.

With very little between them, at 3.3 points each, innovations in water quality monitoring, system design innovations, and energy saving innovations were grouped together in mid-table positions, rated between “mid-level” and “strong” for innovation.

On technology, respondents scored the level of effectiveness of eight different types of tech potentially applicable to reuse. The resulting ranking was unsurprising in that reverse osmosis (RO) topped the list with an enthusiastic score of eight out of 10 points, buoyed by respondents working in the Americas, who rated RO at 8.11, and those working in Asia Pacific, who scored it 8.05.

In second place, ultrafiltration (UF) was considered a more effective technology by respondents whose roles cover Asia Pacific, where it scores 7.12 out of a possible 10 points, compared to the overall average score of 6.81. Those who indicate that they work in the municipal sector also score UF higher than average, at 7.09.

In the comments on barriers to reuse, public opinions were repeatedly cited, from the general, “human perception,” director, engineering consultancy, Asia Pacific; to the many comments focused on public understanding, such as “lack of proper education,” consultant, municipality, Americas; to those reflecting public fears about potential health risks, “sanitary concern,” chief/ head of department, university, Europe.

Survey respondents considered public perceptions the biggest barrier by far in the case of direct potable reuse (DPR), scoring this at 3.94 out of a possible five points, with 54.60 per cent of respondents seeing it as a “very strong” barrier. The score for public opinion as a barrier to DPR rises to 3.94 for those who work in the municipal sector.

With thanks to IDA board director Nikolay Voutchkov, and Abraham Negaresh, senior process engineer at WRc plc, for their expertise and support in helping to shape this research project.

Download your free copy of the full research findings