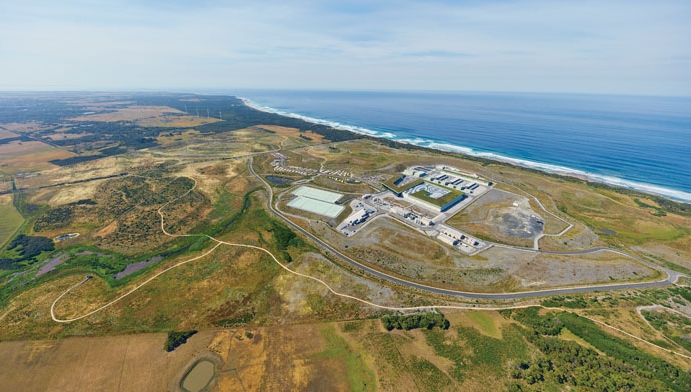 The Victorian Desalination Project (VDP) is a mega-size seawater RO facility, able to produce up to 150 billion litres of water a year when running at full capacity. Located at the southerly most tip of Australia on the Bass Coast, it was procured by the Victorian State government from AquaSure, a joint venture of Degrémont (now Suez), Macquarie Capital, and Thiess (now Ventia), in 2009, for a capital cost of $3.5 billion.

At the time of buying, a Labour government was in power, and the state was in the grip of a searing drought.

However, by the time the project was complete, a mere 37 months later in 2012, rains were plentiful, reservoirs 80 per cent full, and the public had rapidly fallen out of love with the project. When a new coalition Liberal-National government was voted into office in 2013, VDP was in standby mode, became a political football, and was criticised as an expensive white elephant.

Thsi year a Labour government was re-elected, and on 1 April 2016 placed an order for 50 billion litres of water for 2016-17. The decision is backed up by advice from Melbourne’s four metropolitan water businesses; as well as analysis of future security of supply, and forecast storage conditions, Bureau of Meteorology outlooks, and customer impacts.

VDP is now preparing to deliver is first water order by 30 June 2017.

The solutions
* Site chosen from a shortlist of four for its ready access to high activity ocean water
* The plant can operate as three separate 50 gigalitre facilities, giving a high degree of flexibility in ­production
* A team of 52 on-site staff keep the plant in tip top condition and ready to hit full capacity in less than three months
* The building is designed with its highest point above seawater at 26 metres, reducing energy costs in lifting water for processing

The design for the Victorian Desalination Plant is modelled on the first large scale desalination plant built in Australia, in Perth — a Suez design. It has three streams, each capable of operating as a 50 gigalitre plant in its own right, and with the ability for a further half stream to be in operation.

The modular approach maximises efficiency in producing water, particularly for orders below full capacity, and by taking account of variables including the cost of power, and seasonal changes in water conditions.

“The major design challenges were durability, robustness, and certainty of delivery from a plant that had to be flexible enough to cater for different production modes from zero to 150 gigalitres,” says Matt Brassington, chief executive of Aquasure.

At all stages, redundancy is included to allow scheduled and unscheduled maintenance activities to go ahead without compromising the plant’s ability to produce at maximum capacity. As a public-private partnership, all risks are borne by the contractor, and the technologies and treatment processes were chosen for their low risk profile.

“Water quality requirements for this plant are very strict, matching the quality characteristics of Melbourne’s existing water supplies,” says Brassington. The plant uses a full, two-pass reverse osmosis system to remove salt and minerals, resulting in high quality potable water. The entire development, including the desalination plant, covers a 263 hectare site that is landscaped with plants, trees, a dune system, wetlands, and coastal and swampy woodlands, to reduce the environmental impact of the facility, and its effect on the neighbouring community.

A key aspect of the architecture of the main plant building, which has a footprint of 38 hectares, is that it is lowered to 26 metres above seawater at its highest point, cutting the amount of energy needed to lift seawater for processing, and reducing the plant’s visual impact by integrating it into the landscape.

The overall site’s design is based on the concept of a “green line” running through the middle, and the plant boasts Australia’s largest living roof covered with plants and low shrubs. The roof helps to improve corrosion resistance and temperature control at the plant, as well as reducing maintenance costs and noise pollution. Water storage ponds of 1,000 m3 capture runoff from the living roof for irrigation.

Of the nine sites that were visited in a feasibility study conducted before a site was finally chosen, four locations were shortlisted: the Surf Coast, Port Phillip Bay, Western Port, and Bass Coast.

Wonthaggi on the Bass Coast was ultimately chosen as the best location because it has ready access to high quality, high activity ocean water for the supply of seawater, and rapid dispersal of saline concentrate.

The site terrain was considered highly appropriate for the construction of a desalination plant, and it offered ease of access to Melbourne’s existing water network. The city’s water system flows from north and east, to west and south, with pipe sizes that reduce from east to west, making an east-side connection the most practical.

VDP continuously monitors seawater concentrate before it reaches outlets in the ocean. Salinity loggers inside and outside the discharge zone, which is licensed by the Environment Protection Authority Victoria, ensure that seawater concentrate is diluted back to the appropriate levels in a defined mixing zone. Data collected by monitoring the marine environment during the five years before the plant was commissioned has provided an excellent source of knowledge about the dynamics of the local water.

The commissioning process took seven months, with the first RO train taking six weeks, the second, four weeks, and the third, two weeks. Since then, the plant has been maintained in standby mode ready to be brought back into operation as required, and can be started from zero to full production in less than three months.

The facts
* The deal set a new benchmark for public-private partnerships (PPPs)
* Water orders are placed annually and must be confirmed to Aqua­Sure by the state by April 1
* Prices are set in the contract by volume, in increments up to 150 gigalitres
* The contract is managed on behalf the Victorian government by the department of environment, land, water, and planning
* The project generated $1.3 billion of supply contracts, of which 75 per cent went to Australian companies

One of the largest PPPs procured worldwide in the past decade, VDP was a milestone for PPPs, especially given the difficult economic times during which it was brought forward, and the scale and complexity of the project. The plant was originally mooted in the 2007 Victorian state water plan, “Our water, our future”.

AquaSure, a joint venture of Degrémont and Thiess, won a 30-year contract to finance, build, operate, and maintain the desalination plant from the Victorian state p remier, John Brumby, in 2009. One other consortium was shortlisted, BassWater, comprising John Holland Group and Veolia.

The PPP was funded by $3.7 billion of debt from financial institutions in Australia, Europe and Asia. This was refinanced by AquaSure in 2013 with help from Macquarie Capital. The debt is being repaid by contract payments that are made by the Victorian state government, and funded by utility Melborne Water. The payment in 2016-17 was $607 million, not including the amount due for the water, which was reportedly $27 million.

AquaSure subcontracted the design and construction to Degrémont and Thiess (now Ventia), and Watersure was signed up to provide ongoing operations and maintenance services. The capital cost for construction was fixed in the contract at $3.5 billion. “Watersure combines Suez’s expertise in design and operation, and Ventia’s skills in delivery. Both are leaders in their fields,” says Brassington.

VDP can be brought into water production mode as required within three months. Each year, the Victorian government is required to issue a water order by April 1, with production starting in July. Orders are for a set number of gigalitres, and by giving a full year for delivery of the water, the unit cost is kept down. The price of water for each of the options was set in the contract between Victoria state and AquaSure in 2009.

The contract stipulates that AquaSure is to hand over ownership of the plant, in full working order, to the government at no additional cost in 2039.

“The capital cost of $3.5 billion to construct the VDP was fixed in the contract with AquaSure and there has been no increase in cost to the state government or water customers. Having pledged to deliver, operate and maintain the most technically advanced , environmentally sensitive and energy efficient desalination facility in Australia, we are doing just that,” said Brassington.

The ongoing maintenance and operations at VDP are handled by Watersure, under contract to AquaSure. With the first water order coming through this year a section of the plant has begun producing water for the first time.

“The VDP has world class environmental protection, architecture and landscape design to ensure protection of the environment and seamless integration to the local community and coastline. It was the subject to the most comprehensive environmental assessments available under state and commonwealth legislation. These strict performance and contractual requirements ensure the safety of the local environment,” said Brassington.

A number of Australian newspapers and politicians are keeping a close eye on the plant, and the challenge now is to demonstrate that it can produce high quality water during the 12-month supply period, without

Water utility Melbourne Water gives an opinion each year to the state department for environment, land, water, and planning, on how much desalinated water is needed in the year ahead, and forecasts for the following two years. As well as advising a 50 gigalitre order for 2016-17, the view put forward this year additionally suggests that orders of 50 gigalitres are likely to be needed in 2017-18 and 2018-19.

The volume of water ordered depends on analysis of water security and cost, and takes account of water storage levels, demand, and climatic conditions. Analysis pertaining to the water order for 2016-17 shows that total system storage at January 1, 2016 was 1,245 gigalitres, or 68.7 per cent of total storages, down from 1,396 gigalitres, or 77.1 per cent, at the same point in 2015.

Along with Melborne Water, the water retail businesses City West Water, South East Water, Yarra Valley Water, and the state department of land, water, and planning, evaluate water needs using an adaptive framework that charaterises Melbourne’s water storages as either: “high zone”, or secure; “medium zone”, suggesting that five years’ supply is available but action should be taken in the form of water orders; or “low zone”, which is an extreme low water supply situation brought on by exceptional circumstances.

A water order of 50 gigalitres for 2016-17 and the following two years was suggested based on current evidence. The future order pathway is reviewed annually. “As a rainfall-independent, large scale water supply of up to 150 gigalitres a year, VDP is vital for our water security, and guarantees Melbourne’s water supply in times of low rainfall and emergencies such as floods and fires,” said Brassington.

As part of its advice on future ordering, Melbourne Water said that the 50 gigalitre forecasts “represent a balanced estimate of advice for those years based on the modelled average annual decline in median storage volumes over the next three years of about 60 gigalitres a year (and not a three-year severe drought sequence).”