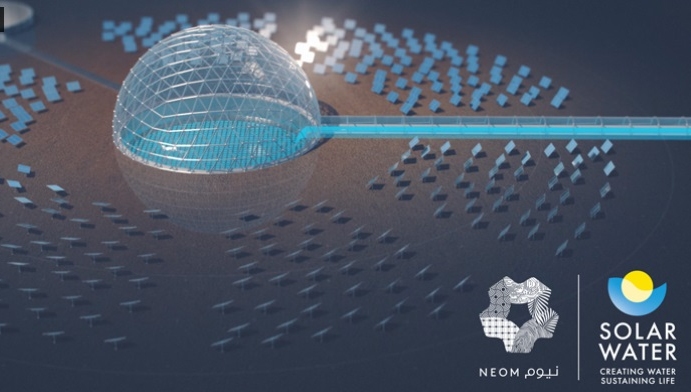 NEOM has signed an agreement with UK-based Solar Water Plc to build the first ever "solar dome" desalination plants in NEOM, northwest Saudi Arabia. The pilot project claims it will revolutionise the water desalination process.

Work on the first “solar dome” begins this February and is expected to be completed by the end of 2020.

NEOM claims that at an estimated $0.34/m3, the cost of producing water via “solar dome” technology will be significantly lower than reverse osmosis, and will produce more concentrated brine.

Commenting on the project, H.E. Abdulrahman Al-Fadli, Saudi Arabia’s Minister of Environment, Water and Agriculture, said: “NEOM’s adoption of this pilot supports Saudi Arabia’s sustainability goals, as outlined in the country’s National Water Strategy 2030, and is fully aligned with the sustainable development goals set out by the United Nations.”

Nadhmi Al-Nasr, CEO of NEOM, added: “Easy access to abundant seawater and fully renewable energy resources means NEOM is perfectly placed to produce low cost, sustainable fresh water through solar desalination. This type of technology is a powerful reminder of our commitment to supporting innovation, championing environmental conservation and delivering exceptional livability. Working together with the Ministry of Environment, Water and Agriculture we can expand the implementation of this technology beyond NEOM.”

Solar Water’s ground-breaking approach, developed at the U.K.’s Cranfield University, represents the first use, on a large scale, of Concentrating Solar Power (CSP) technology in seawater desalination. The process sees seawater pumped into a hydrological “solar dome” made from glass and steel, before it is superheated, evaporated and eventually precipitated as fresh water.

NEOM is harder to define. It appears to be an ambitious plan by Saudi Arabia to create a futuristic “semi-autonomous region” on the edge of the Red Sea, which aims to achieve an international population of 1 million people by 2030, backed by $500bn of Saudi investment. For more details, see: https://www.neom.com/ and make your own mind up.