MIT details process to use brine as a resource 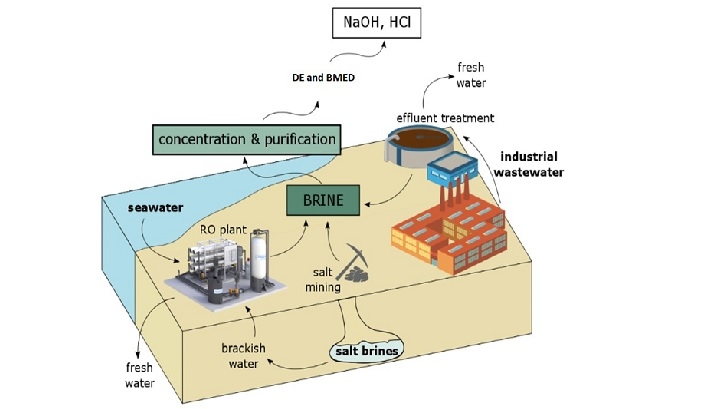 Researchers at MIT have published details of a process to recycle brine for use in desalination plants instead of disposing of it.

The concept is described today in the journal Nature Catalysis (see: http://dx.doi.org/%2010.1038/s41929-018-0218-y ) and in two other papers by MIT research scientist Amit Kumar, professor of mechanical engineering John. H. Lienhard V, and several others. Lienhard is the Jameel Professor of Water and Food and the director of the Abdul Latif Jameel Water and Food Systems Lab.

The method of converting the brine into useful products uses well-known and standard chemical processes, including initial nanofiltration to remove undesirable compounds, followed by one or more electrodialysis stages to produce the desired end product. While the processes being suggested are not new, the researchers have analyzed the potential for production of useful chemicals from brine and proposed a specific combination of products and chemical processes that could be turned into commercial operations to enhance the economic viability of the desalination process, while diminishing its environmental impact.

The researchers have discussed the concept with companies that may be interested in the next step of building a prototype plant to help work out the real-world economics of the process. “One big challenge is cost – both electricity cost and equipment cost,” at this stage, Kumar says.

The research team also included MIT postdoc Katherine Phillips and undergraduate Janny Cai, and Uwe Schroder at the University of Braunschweig, in Germany. The work was supported by Cadagua, a subsidiary of Ferrovial, through the MIT Energy Initiative.