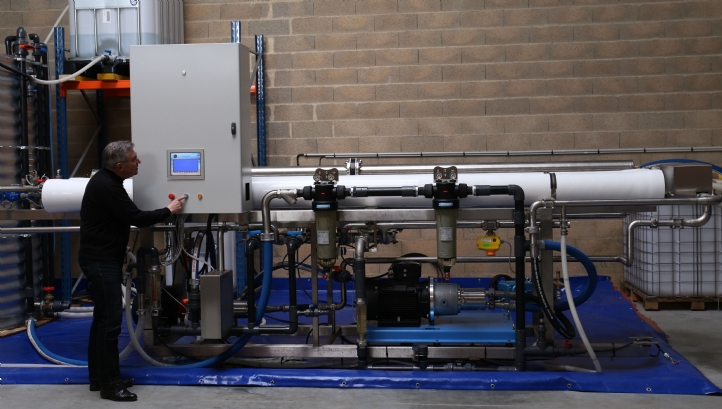 Masdar Clean Energy set a target for its pilot projects of one cubic metre of water for every 3.6 kilowatt hours of energy used. This is a particularly challenging target in the Persian Gulf, where salinity is very high, the water temperature is high, it’s very shallow, and there’s high organic matter.

The partner firms, Abengoa, Suez, Trevi Systems, Veolia/ Sidem, and Mascara have each signed a separate joint venture partnership with Masdar Clean Energy to pilot their technologies. Each of the initial four projects have met or exceeded the energy efficiency target, three operated very smoothly, and two achieved full availability throughout the nine months.

The pilots are hooked up to the conventional electricity grid, the idea being to demonstrate the energy efficiency of the systems, and later to combine them with renewable energy sources. “When membranes were first developed, they were used in countries with relatively good quality seawater. Membranes are dramatically lower in energy consumption compared to thermal distillation, but it’s difficult to run these membrane plants in the Gulf, and it’s only now that a transition is beginning,” says Dr Alex Ritschel, head of technology, Masdar Clean Energy. “Some utilities are very skeptical that reverse osmosis [RO] is the right choice for the Gulf, particularly because systems have been installed and they experienced issues. So to have these pilots up and running, and to show that they work, it’s a good message. Many companies and designers are not really aware how difficult the seawater is here. You need really to know how to deal with it, to have the right pre-treatment systems in place, and to understand how to operate the plant in terms of chemical dosing, backwashing, and membrane cleaning. We know now what system configuration will work. After one year of operation we really know. If a plant operates 365 days without any problem then it’s pretty good. We have shown it can be done,” Ritschel says.

The energy efficiency results for each project depend on variables including water temperature, the viscosity of the water, and “many, many other things”, says Ritschel. “If you just throw out a number it has no meaning, because you need to know all the boundary conditions under which the value was achieved.”

An additional pilot, a joint venture with French company Mascara, was installed in September 2016, this time testing an RO system that’s directly powered by photovoltaics on the roof of the unit. This small scale solution is designed to provide water in remote places with no access to the grid, and is not a utility-scale technology. The next phase of the main four pilots is an optimisation period that runs from September 2016 to spring 2017, during which time the pilot partners will work to squeeze out any further efficiencies in chemical and energy consumption from their designs.

Suez: Suez is involved in two projects with Masdar. The first is piloting a conventional RO system, using dissolved air otation (DAF) and membrane pre-treatment adapted for conditions in the Gulf, and a double pass RO system. “This is demonstrating that seawater RO is affordable, reliable, and able to reach the target. We have achieved 97 per cent availability of the plant,” says Miguel Angel Sanz, director of strategic development, treatment infrastructure, Suez. As the pilot moves into the optimisation phase, the goals are “to optimise every treatment, to minimise energy and chemical consumption, to demonstrate that the new technology is able to reduce operational costs, and ultimately to reduce the water cost”, says Sanz. Suez is testing membranes that are already on the market, as well as next generation membranes.

The second pilot is a new technology that is being tested in an industrial plant for the first time. It’s a system using liquid-to-liquid ion exchange resin technology to increase the volume of water produced without raising seawater intake. It has been developed as part of a partnership between Suez, its shareholder the French energy utility Engie, and Nasdar Institute of Science and Technology, to develop a computer application that can extrapolate pilot data better, to understand how to combine desalination with renewable energy sources.

“We are already experts at taking pilot data and extrapolating it for other environments. Through this new partnership we want to create a model that can be used either on the grid or o the grid, powered by a photovoltaic system. We are looking at, ‘What is the best way to couple desalination technology and renewables?’,” says Sanz. “It’s a very good approach because we are doing it in a real partnership with a potential customer, Masdar Clean Energy. It’s a unique experience in the world.”

The pilot from Abengoa is using a combination approach whereby reverse osmosis is the core process, augmented by membrane distillation as a brine treatment process. The budget for the plant was $7.9 million.

Abengoa is a leader in solar power, but has this year sold four photovoltaic plants in Spain as part of a divestment policy. In August, the company completed a nancial restructuring, with new loans totalling €1.2 billion ($1.3 billion).

Veolia-Sidem’s pilot is designed to assess three innovations: a pre-treatment system that combines flotation and filtration; an energy recovery device; and a new membrane feed configuration that optimises distribution of the fluxes in the membranes.

The plant has beaten Masdar Clean Energy’s target of 3.6 kilowatt hours for each cubic meter of water, reducing it by 7 per cent to 3.3kWh/m3. The biggest challenge was developing a new energy recovery device, a project that Veolia-Sidem is working on with specialist manufacturer from Switzerland, Osmorec. “The energy recovery market is competitive, and every percentage of performance gained can lead to huge savings in operation costs,” says Henri Casalis, project manager, Sidem.

Veolia-Sidem claims that the energy recovery device is one to two per cent more efficient than existing technologies. “We’re improving on our results every day,” says Casalis. “Additional to energy cost savings, our new pre-treatment design can save 25 per cent on engineering, cutting capital expenditure, and reducing the plant’s overall footprint. We expect to improve further on these performances during the optimisation period, and we’re excited to find out how far we can go.”

Veolia-Sidem’s approach to the construction and development of the pilot plant was to treat it like a real-life infrastructure project. “One of the great advantages that Veolia has in understanding its own designs, and the suitability of the whole concept of a desalination plant in a de ned technical and economic environment, is our dual competence, and experience, as a design and build contractor, and a plant operator,” says Casalis.

“We’ve learned a lot about the technologies we implemented, and we’ll continue to push them to their limits during the optimisation period. The main goal is to be able to o er them, and to guarantee their performance on huge desalination projects.”

Casalis adds that while the technologies tested are new, they are “not experimental, they will not require another ve or 10 years to be implemented on a large scale plant”.

“Trevi Systems has a technology that is ideal for difficult water, and we’re running it with seawater, which is not difficult, but the value of the technology is that it can be applied to a more challenging water than seawater, such as the high saline groundwater that we have in the United Arab Emirates, which RO cannot handle,” says Dr Alexander Ritschel, head of technology, Masdar Clean Energy. Ritschel describes Trevi Systems’ approach as “the most innovative by far, because it is a totally new concept of water treatment”.

The results so far are “very good”, he adds, and the project is continuing to develop and to refine its processes to respond to the local conditions. “Very soon, new membranes, and new heat recovery systems will be installed, so this is a very, very interesting process that has the potential to become a technology for difficult feedwater,” says Ritschel.

Trevi Systems is focused on developing forward osmosis systems that operate at a lower pressure and use less energy than conventional RO systems.

Mascara: Latecomer Mascara shakes it up

Mascara president Marc Vergnet made an impact in water supply when in 1974 he invented a hand pump design that today supplies water to more than 50 million people, through 100,000 water points worldwide. “I retired and decided to set up a new company to try to make desalination only with the sun and without a battery,” he says.

Solar desalination system Osmosun was born, and has been welcomed by Masdar Clean Energy as a late addition to its pilot series on energy efficient desalination. The initial aim of Vergnet’s new technology was to supply remote island communities with water. As well as the installation at Ghantoot, in September 2016, a new 80 m3/d project in Bora Bora, in French Polynesia in the South Paci c, is in sight, and there are ambitions for installations in Fiji, Vanuatu, and in the Indian Ocean, Rodrigues Island.

“I have a dream to produce fresh water in Cape Verde, an island country in the Atlantic Ocean o the coast of West Africa,” says Vergnet.

The Ghantoot demonstration project is for a 40 m3/d unit, using a solar photovoltaic generator capable of producing peak power of 30 kilowatts, working eight to 10 hours a day. “It cannot work during night because we have no battery, no storage,” says Vergnet. “It’s the first time in the world that such desalination works. Many people have been working on this possibility, but nobody found it before us. The water in United Arab Emirates is 43 grams of salt a litre concentration, and we will produce fresh water at less than 20 grams a litre,” he says.

While many other solar desalination technologies exist on the market and in development, so far Osmosun is the only one that does not rely on energy storage. “Storage is expensive. When you store one kilowatt hour, it costs €0.8 ($0.9), and you need generally three to six kilowatts for one cubic meter, so you will pay, just for storage, €3 or €4 (£3.3 to $4.4) for one cubic metre of water,” Vergnet says.

The new system is unlike others because it can operate without constant energy. “Nobody has tested a system where the power at the beginning of the day is zero, it increases, and when the cloud is near the energy falls down 80 per cent, and then the cloud goes. Nobody knows how to work an RO system with this very variable energy, and we have succeeded with a very simple and reliable system,” says Vergnet.

When the sun begins to shine at the start of the day, the system starts up, and in the evening it stops, protecting and regenerating the membranes in fresh water. It uses smart technology to smooth pressure variations during operation, and the company claims it is able to produce potable water at an energy consumption rate of 2.5 kilowatt hours per cubic metre, assuming seawater with salinity of 35 grams a litre.

“The key here is that it doesn’t need electricity and it works without batteries, which is a very interesting aspect, because if you are very remote and very far from main activities, then battery replacement is always costly, tricky, and they need to be serviced. If you are really remote, then this system may be ideal because it can operate on its own without the need for specialist maintenance,” says Dr Alexander Ritschel, head of technology, Masdar Clean Energy.

“That’s what we are trying to prove here, so it will be very interesting if it is successful. Also, it will not use any chemicals. If it works, it will be a great success. No chemicals, no batteries, no electricity, and we can still produce drinking water, just out of the sun.”