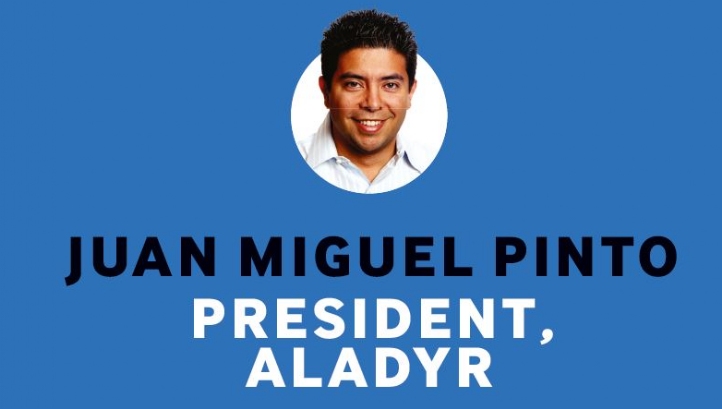 The new president of ALADYR, the Latin America desalination and water reuse association, sees his organisation as a window onto the region for international companies. His big aim is to step up events during 2018, taking knowledge of desalination and reuse out to the market.

Juan Miguel Pinto is brimming with energy when we meet at IDA World Congress 2018 in São Paulo, Brazil. The new president of Asociación Latinoamericana de Desalación y Reúso de Agua — or ALADYR, the Latin American desal and reuse body — is going to need that drive if he wants to meet the tough targets he has set for the organisation and for himself as leader.

But then Pinto comes across as a man who welcomes a challenge. The 37-year-old engineer, appointed as president of Aladyr in 2107, serves on the board of directors of the International Desalination Association (IDA), is the current sales manager for the desalination segment across North and Latin America for energy efficiency specialists Energy Recovery, and is completing an Executive Masters in Business Administration (EMBA) at University of Florida’s UF Hough Business School in 2018.

On top of this, he has vowed to increase membership of Aladyr by 100 per cent, up from 300 members today to 600 by the end of next year. It’s a big leap, but one that Pinto believes is essential to support growth and development in Latin America’s desalination and water reuse markets, as well as boosting economic growth in the region more generally. The industry organisation, founded in 2010, hovered at around 100 to 150 members during its first few years.

“We want to be the leading organisation in water reuse and desalination,” says Pinto, with typical ambition. “By sharing knowledge, we are helping to develop leading technologies, and supporting the environment with solutions that can help to save water and be efficient. We want to support our members and add value, and to be a reference point for municipal players and government entities, helping to grow investment, and the market.” The latter point is particularly important for desalination and water reuse projects, where client entities such as local water utilities can lack the specialist knowledge and therefore the confidence that they need to bring forward new developments.

Pinto estimates that seawater desalination currently represents 5 to 10 per cent of the Latin America water market. The largest slice of investment goes to wastewater treatment, and water reuse, brackish water reverse osmosis (RO), and industrial applications get a varying share depending on the local conditions. The market in each country has its own unique characteristics: Argentina has an ambition to complete 38 municipal water projects nationally (see overleaf); while in Chile, water utilities are mostly privately owned, with a large chunk of investment driven by the big mining interests.

Across LatAm, however, the two mega trends influencing water projects are commodities pricing, and regulation. “Part of the Latin America market is driven by commodities, and we are expecting it to grow as the prices of copper and iron ore increase. It’s an example of why the market can grow,” says Pinto. (The price of high grade copper is up by 22.32 per cent a year, as of mid-November, to $3.07 a pound, while the price of iron ore fell by 16.07 per cent to $61.79 per metric tonne over the same period. Analysts suggest that any sustained rise in prices over the coming years is likely to be gradual rather than dramatic.)

The other reason for optimism is the wide-ranging overhaul of regulation across the region, which is creating the legal frameworks that are expected to smooth the path for utilities and developers to create public-private partnership (PPP) projects.

“Latin America water regulations are behind the rest of the world and it is trying to catch up. They are changing the rules, and are going to force some companies to have more water treatment which I believe will drive growth,” says Pinto. “The political environment is becoming more friendly to PPPs, and many countries are developing and writing new regulations. Local governments have figured out that they don’t have budgets available for plants, and are aiming to develop PPPs. We are going to see growth in PPPs,” he says.

“We want to be a reference point for municipal players and government entities,” says Pinto

The driver is that Latin America needs water. On the other side, investors are looking for reassurance that the financial and economic conditions are right before they commit. “Can they match together? If you have the need, you have to make it work. It’s going to happen, the question is, when?” says Pinto. ALADYR is carving out a role as a reference point between the different groups, with an aim to support market growth during 2018 and beyond.

How will he do it?

The organisation’s stated mission is to “to be the leading association in the reuse and desalination of water in Latin America, generating recognition for the professionalism of our members, supporting development of new technologies and environmentally friendly systems that preserve water and promote its efficient use.” A crucial element of the mission is to provide a hub for the industry and its partners, to promote communication and to provide answers to those who want to learn more about reuse and desalination. The body is formally aligned with Aedyr (Asociación Española de Desalación y Reutilización), the Spanish trade body for reuse and desalination engineers; CaribDA (Caribbean Desalination Association); and the IDA.

The big focus during Pinto’s tenure will be an “ever more aggressive” push to create value, particularly through an expanded programme of education in the shape of international seminars. “We are active in preparing seminars around Latin America. We have 110 to 130 people attending per event,” he says. ALADYR’s International Seminars on Water Reuse and Desalination are typically two-day technical events with 20 to 25 speakers, covering a selection of topics of interest to the local market. The organisation ran one event in 2016, two in 2017, and will run six in 2018 — in Argentina, Brazil, Chile, Colombia, Mexico, and Peru. Pinto, who was born in Venezuela, says that he wants to “lead at a faster pace” in a bid to drive the region forward.

As part of this push, in 2018 ALADYR will create a young leaders programme, and will invite students to the seminars for free, supported by sponsors. Companies from Asia and other parts of the world often view ALADYR as a window through which they can enter Latin America, Pinto adds. “Aladyr is the safe way to get a feeling of the market, to adapt your strategy, and know how you are going to approach Latin America,” he says.