Huntington Beach is ‘precedent-setting’ for California 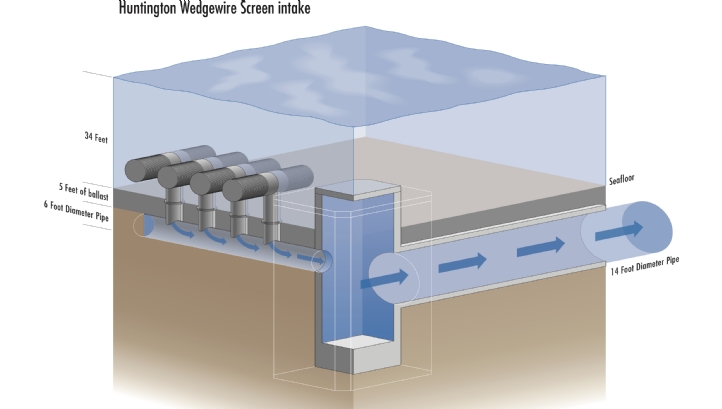 When the California State Water Board adopted new regulations on seawater desalination plants in 2015, Poseidon, the developer of a proposed 50 million gallons a day (189,000 m3/d) capacity seawater RO plant in Huntington Beach, California, went back to the drawing board on its water intake technology.

The regulations state that where feasible, plant developers must use sub-surface water intake technology; that is, either wells or infiltration galleries.

Poseidon’s view, and that of the Independent Scientific Technical Advisory Panel (ISTAP), which was convened by Poseidon and the California Coastal Commission from 2013 to 2015 to evaluate the feasibility of sub-surface water intake at Huntington Beach, is that it’s not feasible at the site. As well as infiltration galleries, ISTAP evaluated slant wells, horizontal wells, vertical wells, and tunnels.

“It’s not feasible to build one of these systems at Huntington Beach. It’s a very high wave action environment, a very highly populated beach environment, and these type of intakes are not the norm. There was at one point a belief that they were an emerging technology, but in our experience and that of the industry around the world, they are the exception to the norm,” says Scott Maloni, Poseidon vice president, project development.

Where a sub-surface intake system is unfeasible, the regulations require plant developers to build a screened ocean intake, with slot widths of 1mm or less, and inflow velocity of water through the slots of less than half a foot (20cm) a second. The regulations are designed to minimise the intake and mortality of marine life. Poseidon’s concept for water intake at Huntington Beach is just such a wedge wire screen intake (see picture, left). However, there are two big challenges to this approach at the Huntington Beach site.

The first challenge is that the level of seawater salinity requires consideration of material corrosion resistance, and biofouling resistance; and the second is the distance offshore — the screens would be located 1,840ft (560m) offshore at water depths of 35ft (10m) — requiring consideration of methods for cleaning the screen faces. These two challenges mean that maintenance must be considered as part of the initial design effort.

“As far as we know, there is no desalination plant of more that about 15 million gallons a day capacity (68,000 m3/d), anywhere in the world that uses this type of intake technology in an open ocean environment,” says Maloni. “There might be some power plants that draw water from rivers or lakes that use wedge wire screens that have 1mm, but we’re not aware of any open ocean desalination. So this would be state-of-the-art in terms of seawater intake technology for seawater desalination plants, as far as we know.”

Poseidon, the developer behind the Carlsbad Desalination Plant in California, describes the Huntington Beach project as in the “late development phase. The exact design of it won’t come until much closer to the end of permitting,” says Maloni.

The next stage of permitting for the proposed new plant is to get permits from the California State Lands Commission, and based on the strength of its environmental analysis, Poseidon can then obtain further permits from the Regional Board and the Coastal Commission. It expects to have completed the permitting process by the end of 2017.

“Environmental laws and regulations in California are more stringent than anywhere in the world, as far as we know. The real concern in California with these intakes is not fish and mammals, it is fish eggs and larva,” says Maloni. “Carlsbad was the first large-scale desalination plant permitted in the state. It has now changed its regulations, and we will be the first plant through the new permitting process. We are setting the standard, and we’re proud of that. We’ve got a lot of arrows in our back from it, but we were successful in Carlsbad and we’re going to be successful in Huntington Beach. It’s just a matter of time.”