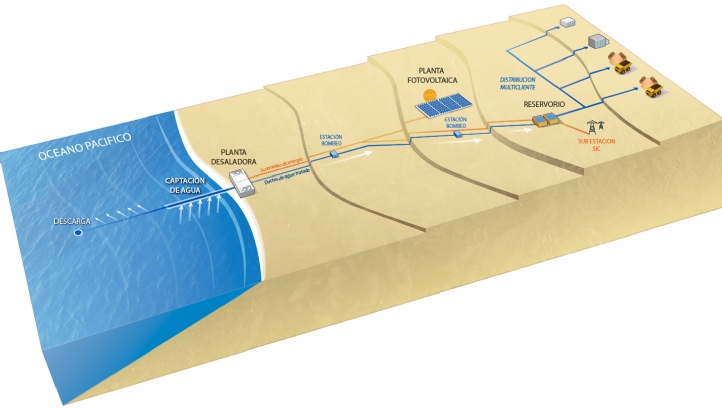 Energías y Aguas del Pacífico (ENAPAC) is a solar-powered desalination plant and water conveyance project currently in development by Chilean engineering firm TRENDS Industrial. The company aims to sell water to multiple clients including numerous mining operators in the region of Atacama in Chile, many of which potential buyers have expressed an interest in the project. Once an environmental impact study is completed, more detailed commercial conversations with potential clients will move ahead.

Mining operators in the region have significant opportunities to increase their extraction, but the lack of available water to support operations is holding them back. Increasingly, they are under pressure not to use freshwater sources that are needed by the community for drinking and sanitation.

TRENDS sees an opportunity for a multi-client project that will use the abundant solar energy in Atacama desert to power a specially designed system that will take seawater from the Pacific Ocean, desalinate it, and transport it for use by mining and other clients. The success of the vision hinges on new technology Synwater. The system, which will be tailored to suit the specific requirements of the ENAPAC project, has been developed by Germany company Synlift, and is based on the principle that one way to enable use of solar or wind energy to power industrial processes is to develop systems able to tolerate wide variations in energy supply.

If the proposal goes ahead, it will result in construction of one of the largest desalination plants in Chile, with peak capacity of 126,000 m3/d, and will be the country’s first multi-client desalination project.

The proposed ENAPAC project will be situated south of Caldera and east of Copiapó, close to the shoreline. The Atacama region of northern Chile is suffering from an intense drought, and there are significant demands on water resources for drinking and sanitation, agriculture, and industry including mining.

The Chilean mining industry, which wants water to support expansion, has crossed swords over water supplies with the local municipalities. In many instances, mining operators have invested in their own small scale desalination projects, which are dotted along the coast. Now engineering firm TRENDS Industrial is financing development of large scale desalination plant to be powered by solar energy, with the intention of selling produced water to multiple mining clients.

It has held initial conversations with potential mining customers, as well as project financiers, is now conducting an environmental impact study, and building out the project specifics, including costings.

“The region has big potential to increase mining capacity, but the operators require a constant flux of water,” explains TRENDS Industrial director of engineering Hagen Gleisner. “Until recently, mining operators have used continental waters, but environmental laws and the social license to operate that they need has forced them to find alternative sources of water, and desalination arises as the most feasible and optimum answer.”

A solar photovoltaic plant to power the desalination system is a practical response designed to keep operating costs at an affordable level, and one that’s seen as an obvious solution given the high incidence of solar in northern Chile. “Chile is fairly new to desalination. Climatic conditions are ideal for renewables desalination, and we hope that this project will have great influence on other projects,” says Gleisner. “From a national point of view, it can provide an impulse for further, large scale integration of fluctuant energy systems. And globally, we hope that the ENAPAC project will put Atacama region and Chile in a leading position regarding innovation in solar desalination, and that we can inspire others who have equivalent conditions in terms of seawater accessibility and solar energy.”

The capital cost of the project is pegged at $500 million, to cover a photovoltaics plant, water conveyance system including five pumping stations, a new reservoir, and the RO plant. Gleisner points to “viable expressions of interest from German banks” to finance 85 per cent of the cost, as well as support from the German government, and credit insurance specialist Euler-Hermes. The remaining 15 per cent must be provided by the project owner in equity capital.

German technology provider Synlift has focused on developing systems that enable industrial processes to run on renewable energy. One of its early projects, in 2003, was to install the first wind turbine in Abu Dhabi, on Sir Bani Yas Island, eight kilometres off the shore in the Arabian Gulf, primarily to power desalination. The company toured the international water conferences scene about five years ago, but found the market relatively unreceptive to its ideas. “Now we take the market as ready,” says Synlift managing partner Joachim Käufler, and a new company was established in 2015.

Synlift’s conceptual approach is to develop flexibility in industrial processes enabling them to power up and down to match a fluctuating power supply, and to store product that’s produced during peak operations, rather than to store the energy generated during peak sun or wind hours.

The ENAPAC project envisages building a new reservoir to store produced water in Copiapó, about 45 miles from the treatment plant. The water will be conveyed by a twin system of glass fibre reinforced pipes, of 1.4 metres diameter, across a height span of 700 metres, by way of five pumping stations. The first pumping station will be at the intake, the second at the desalination plant, two on the piping route, and the final pumping station will be situated at the reservoir. A dedicated solar photovoltaics plant will be constructed to power the treatment plant and water conveyance network, producing up to 100 megawatts (MW). The water treatment system is to be conventional reverse osmosis, and this will be expected to flex up and down in production levels from about 84,000 m3/d, potentially up to 216,000 m3/d at peak times; and averaging at around 90,000 m3/d.

The project hinges on the Synwater load management system, which reads the real-time signal output from the power generation facility, calculates the probability of the power output increasing within the next second, and then signals to the pumps to adapt as closely as possible to this power output. “The more the power output and the power consumption is in balance, the higher the share of renewable energy used. This sounds very simple, but in reality it’s not so simple,” says Käufler. “The challenge for the desalination system is to operate across such a wide variation of flux. How long can you stress your membranes when the wind velocity is high? We are stressing our membranes above the recommended long-term value, of course it is only for a few seconds, but for how long is it recommended? We have tested membrane behaviour under extremely fluctuating process conditions, particularly how long you can run a membrane with peak flux, and then come down to low flux. What is the fatigue behaviour of such a membrane? What are the limits?”

The ENAPAC project requires about 3.5 KwH/m3 of desalinated water, including pre and post-treatment, and about the same energy again to pump the water to the mining industry up in the mountains. The financial optimum for the project will be for solar to provide 80 per cent of the power, while the remainder will come from the grid during the cheaper, off-peak hours (Chile’s energy pricing changes hourly). The load management system will aim optimally to adapt the operations of the water treatment plant and the water transport system to fluctuating power output levels and energy pricing.

“We believe that this is the future for medium or large scale systems with high wind or solar penetration. We are working with 80 per cent, and in upgrade versions 95 per cent renewable energy,” says Käufler.