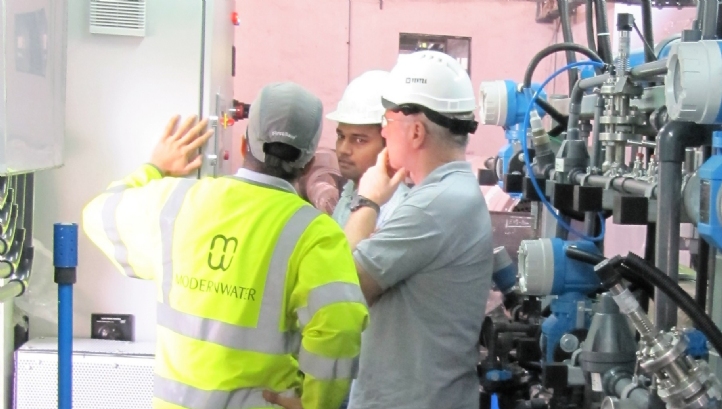 Modern Water has secured the first sale of its proprietary All-Membrane Brine Concentration (AMBC) technology, to a textile dyes company in India.

The news follows the company’s announcement in December 2016 that it had successfully completed pilot plant testing of the technology.

The new project is in partnership with Advent Envirocare Technology, with which Modern Water signed a joint commercialisation agreement for brine concentration in India in March 2016. The two jointly funded the pilot project.

“The whole concept of our brine concentration came about by us looking at ways to generate high osmotic pressure solutions. Where seawater reverse osmosis finishes, our process and other processes like thermal brine concentrators take over. In terms of energy consumption, AMBC is quite a bit less than anything that’s using thermal energy, or even electrical energy, to run a vapour compressor. Energy wise, it’s significant, and capex-wise, clearly it’s competitive given this order very rapidly after pilot testing,” said Modern Water technical director Peter Nicoll.

The company said that the pilot had “clearly demonstrated that it can achieve higher brine concentration that conventional technologies, significantly reducing the wastewater volume for subsequent brine crystalliser treatment. By integrating AMBC into their zero liquid discharge projects, customers can substantially reduce capital costs and operating costs.”

The AMBC system will be built into a new facility, with completion scheduled for mid-2017.

Modern Water’s brine concentration technology developed out of the company’s early focus on forward osmosis desalination, through which it developed extensive knowledge of osmotically-driven membrane processes.