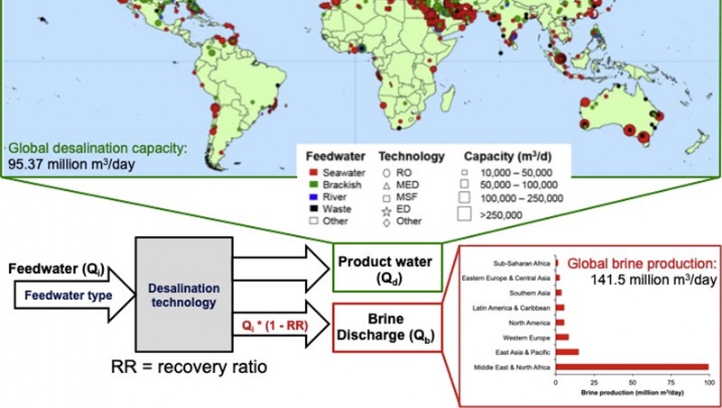 The United Nations has called on the desalination industry to clean up its act on brine as the number of desalination plants worldwide continues to climb.

The call comes as a new UN-backed research paper reveals the size of the challenge. The paper presents a synthesis of desalination data suggesting that 15,906 desalination plants operate worldwide. They generate 142 million m3/d of brine and 95 million m3/d of product water.

The research particularly calls out desalination plants in the Middle East where thermal technology remains widespread. Saudi Arabia produces 22 per cent of the world’s brine, the United Arab Emirates 20.2 per cent, Kuwait 6.6 per cent and Qatar 5.8 per cent.

The authors cite risks to ocean life and the marine ecosystem when high-salinity and toxic chemical-laden brine is pumped back into the ocean. The main chemicals of concern are copper and chlorine.

The paper additionally highlights ways to create economic opportunities from brine. These include its use in aquaculture, to irrigate salt-tolerant species and to generate electricity. The report adds that salts and metals can be recovered from brine, including magnesium, gypsum, sodium chloride, calcium, potassium, chlorine bromine and lithium. And that improved technology could in the future enable mining of metals and salts such as sodium, magnesium, calcium, potassium, bromine, boron, strontium, lithium, rubidium and uranium.

“There is an urgent need to make desalination technologies more affordable and to extend them to low-income and lower-middle income countries. At the same time, we must address the potentially severe downsides – the harm of brine and chemical pollution to the marine environment and human health,” said Dr Vladimir Smakhtin, co-author of the paper and director of the UN University Institute for Water, Environment and Health (UNU-INWEH) – which styles itself ‘the UN Think Tank on Water’.

The research team comprised scientists from UNU-INWEH, based in Canada, the Wageningen University, Netherlands, and the Gwangju Institute of Science and Technology, Republic of Korea.

The paper, ‘The state of desalination and brine production: A global outlook’ will be published in Science of the Total Environment on 20 March 2019.

The Long Read: Where’s the innovation in brine treatment? (March 2017)